The Rainforests of Southeast Alaska 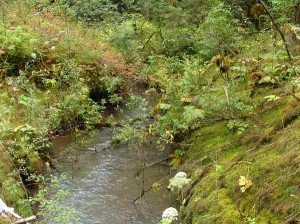 By definition, a temperate rainforest receives between 60 – 200 inches of rain annually. The canopy of trees covering the forest excludes 70 percent of the sky. Temperatures range from as high as 80 degrees in the summer to near freezing in the winter. The mean annual temperature is 39 – 54 degrees. Temperate rainforests are coniferous (cone-bearing) or broadleaf forests. That means one will see plenty of Sitka Spruce trees, Douglas fir, Red Cedar and Western Hemlock. The forest floor is covered with ferns, mosses, lichens, and small plants. And there is an abundance of flora and fauna – so much so – that scientists say there is more biomass in a temperate rainforest than any other biome on earth. There are, on average, 500 tons of living things per acre – that translates into 206 pounds per square yard. 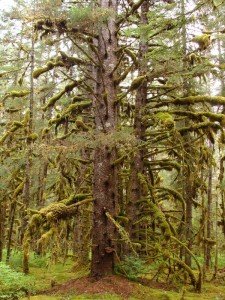 The nation’s largest forest is the Tongass National Forest with 17 million acres – so designated by Teddy Roosevelt in 1917. Nestled inside the Tongass in Southeast Alaska is some of the lushest vegetation found anywhere on the planet. It’s part of the largest temperate rainforest region in the world. It stretches from central California to southeast Alaska.

Any itinerary to The Last Frontier should include a trip to the temperate rainforest of southeast Alaska. Excursions can be planned from Bartlett Cove in Glacier Bay National Park and Preserve just outside of Gustavus, Alaska. There are guided hikes or independent treks. All hikes are guaranteed to fascinate with forest floors covered with ferns, mosses, lichens, and small plants. Red squirrels, porcupine, woodpeckers, maybe even a meandering moose or bear will make an appearance. Trails shrouded in mist with trees wrapped and drenching with moss, it’s a magical – even mystical outing.

Just be prepared for green. Green like you’ve never experienced before.