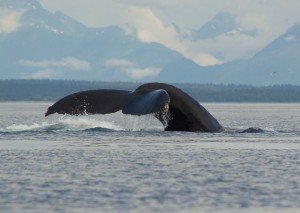 Every year, thousands of humpback whales migrate more than 3000 miles from Hawaii to Alaska. They spend winter in tropical waters for mating and calving, and then make the 4 – 8-week voyage to temperate and polar waters in Alaska during the summer to feed and rebuild their blubber supply.

Point Adolphus in southeast Alaska near Gustavus is a popular feeding area for the Alaska humpback and a popular place for travelers to get a glimpse of these enormous mammals.

Whales have always held a certain fascination for folks – if not a little fear – because of their sheer size. Many books have been penned and many movies produced featuring the “king” of the oceans, including the new movie, “Big Miracle,” based on the true story of three whales trapped in Barrow, Alaska.

Part of the attraction of whales is their playful nature.  Humpbacks are acrobatic and can put on a spectacular show of “breaching” – lifting their entire body out of the water while slapping their fins on the way back down. Sometimes they perform a spin move in the air, sometimes they spout air or sometimes they slap their “flukes” or tails with a huge splash. They’re entertaining. And they even sing. Yep. Humpback whales, especially the 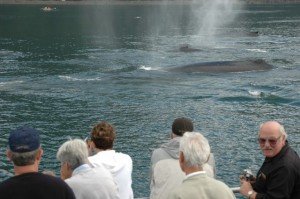 males, are known for their singing. During the breeding season, males sing the longest, most complex song in the animal kingdom. The song can last 20 minutes.

Humpbacks are the fifth largest of the great whales. They’re so named because of the distinct “hump” that shows as the whale arches its back when it dives.

Alaska Humpback Whales are “baleen” whales. Instead of teeth, they have between 270-400 baleen plates, which hang from their top jaw. They feed by taking large gulps of water (a gulp can be 1500 gallons of water). Humpbacks use a hunting technique called “bubble netting.” They swim in a spiral beneath a school of fish or krill (a small shrimp-like crustacean) blowing lots of bubbles. This creates a “net” of bubbles that traps a giant mass of krill. They then swim up through the center with their mouths wide open enjoying their favorite meal. The baleen plates act as filters for the fish and krill. The nutrient-rich waters at Point Adolphus make southeast Alaska an especially great place to view them feeding.

The best time to view humpback whales at Point Adolphus is between May and August. Point Adolphus is located near the Glacier Bay National Park and Preserve and Gustavus, Alaska. There are daily flights to Gustavus. Glacier Bay Country Inn in Gustavus is a comfortable and convenient place to stay to plan a kayaking trip to view the whales or charter excursions.

Truly, it’s a whale of a good time.